Why efficiency is so important.

A wood stove must be at least 75% (HHV) efficient to qualify for a new 26% Federal Tax Credit. Investing in a Kuma saves you $1000 or more when you purchase and install the appliance and that is not even the best savings...

Over the life of a stove (let's say 15 years for example) Investing in Kuma's efficient Hybrid Technology would save you nearly $2,000 in fuel costs, which is equal to 23,000 lbs of wood that you do not need to chop, stack and haul into the house.  So if you like to crunch numbers, you can compare the fuel costs and burn time comparison below.  We compared our new hybrid technology to a leading Canadian manufacturer's non-hybrid technology.  All of the data is taken from official EPA test reports: 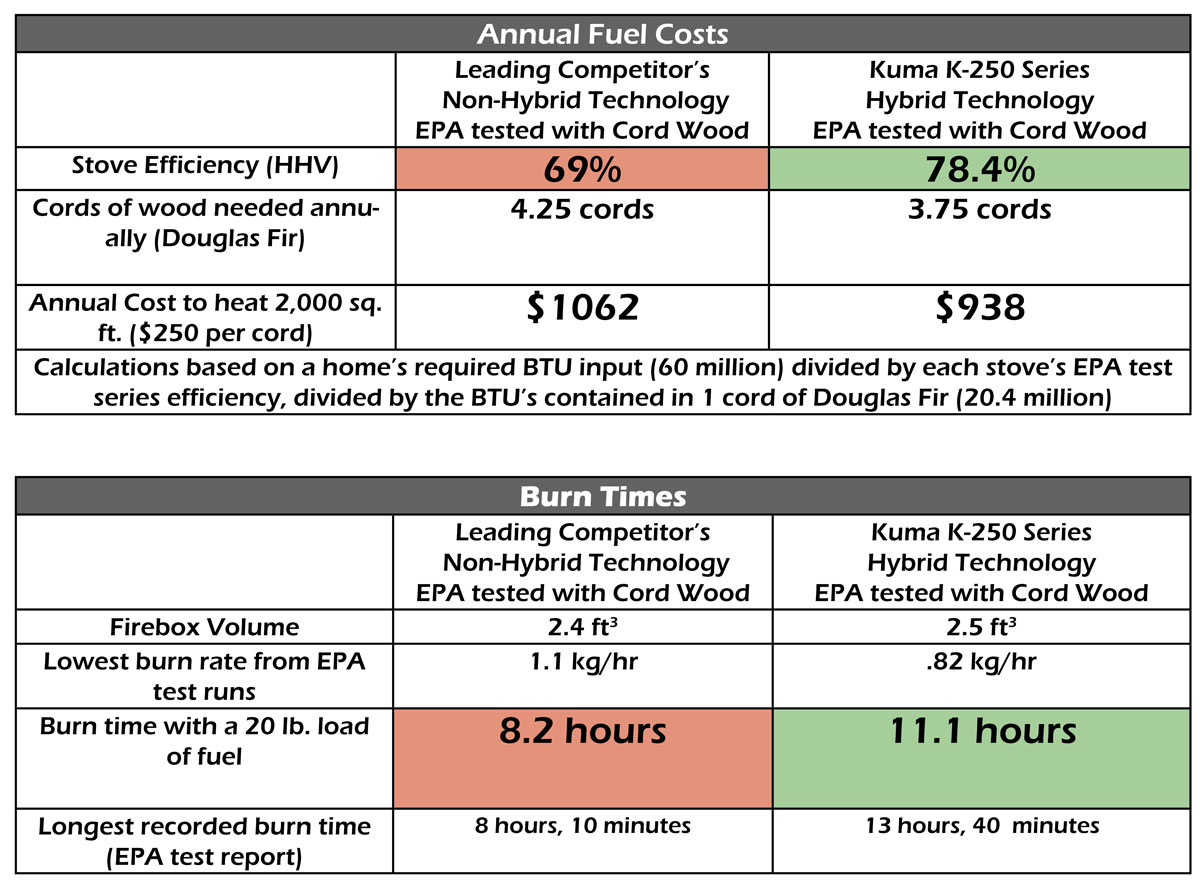 Hot fires always burn cleaner... or do they?

The easiest way to clean up a wood fire is to burn it hot, so many manufacturer's use thermal combustion (hot secondary combustion) to make their stoves burn clean.  The problem is, as you can see in the chart above, is that a hot fire is not a long burning fire. 20 years ago when emissions standards were not as strict, you could acheive a decent overnight burn and still be relatively clean.  With 2020 emissions standards many stoves are now lacking adequate low burn rates.  Kuma's Hybrid technology uses thermal combustion combined with a combustor that actually lowers the temperature at which wood smoke burns!  Because of this our stove burned for over 5 hours longer than our competitor's stove during it's emission testing.

What is HHV and LHV, and what is the difference?

So, how does this affect wood stove efficiencies?  It's simple mathematics, BTU's out divided by BTU's in.  The dividend (BTU's out) is the same in both HHV and LHV calculations. It's the divisor that changes, a lower number for LHV, or the higher number for HHV.  A lower divisor (LHV) will always produce a higher quotient (in this case, efficiency %).

If you have additional questions about HHV and LHV, and their differences, call us at 888-714-5294.  We'll be glad to help explain it further.

Why do we show both HHV and LHV efficiency numbers?

The issue of efficiency can be somewhat confusing if you're not sure which numbers are being used.  If one stove manufacturer publishes only HHV numbers, and another manufacturer publishes only LHV, a direct comparison of efficiency cannot be made.  Most manufacturers only publish LHV efficiencies since they are higher and that looks better than being lower.  We publish our LHV efficiencies to help you make a direct comparison to other stoves. The IRS did allow the use of LHV for the purpose of qualifying for the 25C tax credit ($300 credit that expired in 2020). For the 25D tax credit (in effect through 2023) the IRS has mandated the use of HHV efficiency (75% or better).  We publish our HHV efficiencies because HHV is used by the US EPA as the "actual" efficieny on its certified stove list, and because virtually all other heating equipment in North America is rated using HHV.  In order to compare the efficiency of a Kuma stove to that of your furnace, for example, you need the HHV efficiency number.

Q: What is a catalytic combustor?
A: A combustor is a device that lowers the temperature at which wood smoke burns. This converts smoke and unwanted pollution into useable energy for your home, especially during low burn rates. Combustors are now being combined with non-catalytic technology (burn tubes) to create ultra-efficient hybrid wood stoves.

On average, wood stoves spend over 80% of their life in the low to medium burn rates.

Q: How does a hybrid stove operate compared to a non-catalytic stove.
A: An easy to use bypass lever allows you to quickly heat up the chimney before engaging the burn system. In addition to hybrid stoves, many non-hybrid stoves offer this same bypass feature as an added benefit to the operator.

Q: How long will the catalytic last?
A: Omni Environmental Laboratories, an independent test lab, performed a study on the effectiveness of catalytic combustors over time. The data showed that after 9 years of use, a stove equipped with a combustor is still cleaner and more efficient than non-catalytic stoves.  Additionally, the warranty on a Kuma Hybrid combustor is 12 years: That is 7 years longer than some manufacturers will warrant their entire stove.

Q: How do I know if my catalytic stops working?
A: With a hybrid stove, the thermal combustion system (burn tubes) does most of the work so you will likely not notice any reduction in performance over time.

Q: Are combustors unreliable and fragile?
A: No, an all-metal combustor encased in thick stainless steel is just as durable as any other baffle component in a stove. 40 years ago, some poorly placed ceramic combustors were prone to early failure. Some manufacturers may attempt to scare customers with this outdated misinformation.

Q: Why do manufacturers use them?
A: To achieve longer burn times and higher efficiency than non-catalytic stoves. If you compare the burn rate and efficiency from each stove’s official test data, you will find the hybrid stove to be unquestionably superior.